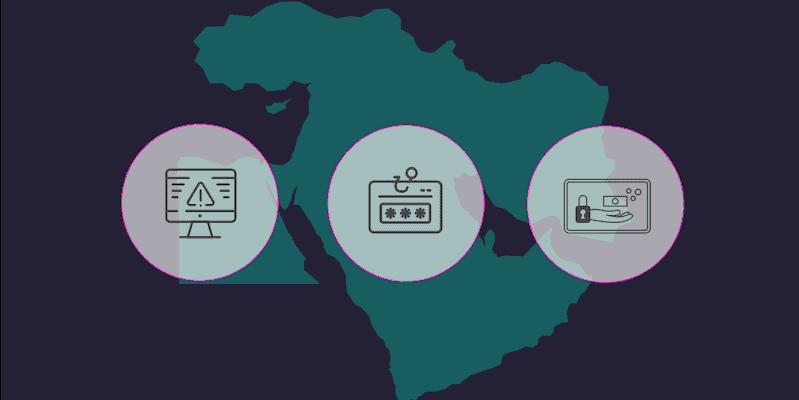 SECURITY CONCERNS ARE HEATING UP IN THE MIDDLE EAST

Rising rates of cybercriminal activities occur as threat actors observe the flourishing economies in the Middle East. These activities can range from the opportunistic data breaches to more targeted attacks, and increasing use of ransomware by threat actor groups. As security professionals in this region plan for 2021, here are the top three threats to consider:

According to a 2020 study by the Ponemon Institute and IBM Security, the average cost of a data breach incident incurred per company in the Middle East is $6.53 million USD, well above the global average incident cost of $3.86 million. The reported financial impact of data breaches has risen 9.4% over the past year (based on data from United Arab Emirates and Saudi Arabia based companies), with threat actors targeting industries with the most sensitive customer data for financial gains. Healthcare companies were found to incur the highest per record cost of a data breach, closely followed by the financial services and technology sectors.

The Verizon Data Breach Investigation Report 2020 (VDBIR) found that 80% of data breaches are related to brute-force cracking the use of lost or stolen credentials.

A vast majority of data breaches are through the use of credentials, with cybercriminal obtaining a legitimate user’s details to commit fraud or worse. Account takeover (ATO) hackers seeking to steal or uncover credentials may employ brute force tools, account checkers, credentials stuffing tools, or software such as SentryMBA or OpenBullet which allow them to gain access to a victim’s account and then access sensitive data through this entry point.

These account credentials to themselves are a valuable product on the cybercriminal market— some criminal may stop at selling the compromised credentials on criminal forums.

Other cybercriminals will utilize the credentials themselves, logging in to retrieve data and then selling the files on dark web marketplaces (see below).

Even the best end-point security technologies can’t ensure 100% protection from a data breach. This is because although the majority of these breaches were conducted by malicious actors (59%), there are also incidents due to system glitches (24%) and human error (17%) according to the IBM Security Report. While data breaches are unfortunately inevitable, detecting stolen or lost credentials on the dark web can be done quickly and effectively using Digital Shadows’ SearchLight.

Phishing-related attacks and scams rose in Q2, both due to greater success of such actions with COVID-19 related subject lines increasing malicious email openings and an overall increase as users spent more time spent online. Phishing is a tactic widely employed by both cybercriminal and nation-state actors.

This year, more than 2.57 million phishing attacks were detected across the Middle East, from Egypt to the UAE, Saudi Arabia, Qatar, Kuwait, Bahrain and Oman according to a Kaspersky Security report.

Phishing sites or applications may entice customers and employees into entering their credential information or install malware on their devices. Meanwhile, spoof social media accounts may offer deals that are too good to be true (i.e. A $25 Nike gift card if you share this post!) or impersonate official customer support channels and steal customer information or redirect them to impersonator websites and applications.

Nowadays, the barrier to entry as a cybercriminal is almost zero— or as low as $15 (see below). Instruction guides and templates for creating phishing social media pages or email tools are cheap and plentiful in dark web marketplaces frequented by cybercriminals.

Kaspersky security researchers reported in October 2020 that cybercriminals had successfully stolen user login credentials from thousands of Arabic-language Netflix users after deploying an impersonator website posing as Netflix customer support page. The credentials could then be posted for sale on dark web marketplaces or worse— used to send legitimate emails to extract payment card information to restore their accounts or extort additional funds.

Digital Shadows’ researchers have been tracking phishing activities of Bahamut, an advanced persistent threat (APT) group and “hacker for hire” gang. As of Oct 2020, security researchers have attributed several ongoing cyberespionage campaigns targeting Middle East private sector VIP’s and government officials, some through deployment of impersonating mobile apps on the Apple’s App Store and Google’s Play store in order to get access to target’s phones.

Given the technical sophistication and high quality artistry of these phishing ventures— from social media accounts to impersonator websites, it can be difficult to prevent all employees and customers from falling into one of these traps. At Digital Shadows, we recommend switching to a proactive stance on phishing attacks to protect credentials from ever being stolen in the first place.

Educating employees and customers on double-checking website URLs, being wary of email addresses and opening web links and attachments within emails are important policies. In addition to this, employing a security tool which proactively detects phishing sites, mobile apps, and spoof social media accounts that look like they are attempting to harvest credentials.

In addition to data breaches and phishing tactics, security officials need to be scanning their horizons for more targeted attacks such as social media account breaches and ransomware attacks which seek to extort large extortion sums or sensitive data from their victims.

January 2020 started with international coverage of two very public hacking incidents. Firstly, state-run Kuwait news agency KUNA’s Twitter account was hacked with a tweet informing audiences that US forces intended to withdraw from the Arifjan base within three days— untrue as the Arifjan base is the main US army base in Kuwait where thousands of troops are housed.

Additionally in January 2020, Oman’s largest insurance company Oman United Insurance Co SAOG disclosed a ransomware attack on their data center which suspended operations for a day. The company disclosed that cybercriminals had obtained customer data from Dec 2019-Jan 2020 but did not publicize financial losses or fallout from the breach.

In the last 6 months, Digital Shadows researchers reported over 55 intelligence incidents targeting the Middle East. Of the 55 intel incidents, 17 of those were specifically related to ransomware.

From June through September of 2020, five Middle Eastern Companies (construction, manufacturing, engineering, and technology industries respectively) were disclosed as victims on the dark-web news site Maze News, a data dump extortion site for the ransomware gang Maze. Additionally from September through November of 2020, four more companies (professional services, retail, manufacturing, and healthcare industries) were named on the home page of Egregor News, a similar ransomware variant to Maze that has increased their frequency and sophistication of attacks in the midst of Maze’s ceasure of operations.

The rise and successes of these highly profitable double-extortion model ransomware gangs such as Maze, Egregor, Sodinokibi, and Netwalker predicts that targeted ransomware attacks will continue to become a greater security concern to Middle Eastern companies.

In addition to monitoring these threat actors, Digital Shadows’ researchers have observed an increase in Ransomware as a Service (RaaS). For instance, the Thanos ransomware variant, first noticed for sale on dark web marketplace in June of 2020, which has been targeting unnamed state-affiliated organizations in the Middle East and North Africa.
With new ransomware groups and technologies emerging, it can be daunting to stay up to date on the latest threat actor’s tactics and activities. If you’d like to stay up to date with relevant intelligence reports on threat actors and ransomware groups targeting your industry or region check out our product SearchLight here.